Despite having bought it over a year ago, my Commodore 128D has not found its way onto my workbench as often as I’d intended. There are two specific reasons for this, the built in 1571 disk drive is temperamental to say the least and the fan that cools the machine’s power supply is not only noisy but cursed with a tedious whine.

Using the 128D therefore has been an exercise in irritation and frustration when it should be an enjoyable experience given the unit’s multiple computing personalities, a Commodore 128, 64 and CP/M capable machine all rolled into one.

I then became aware of the Commodore Flyer.  This superb piece of kit acts as an internet modem and disk drive emulator, thus allowing me to forget about the flaky 1571 and transfer software into the 128D at my heart’s content.

I ordered a Flyer  from Retroswitch and it arrived promptly from the States.  It’s a really nicely engineered solution and I was quickly up and running, updating the firmware and pulling down disk images from the Commodore Online cloud service that I’d previously set up.

The guys over at Retroswitch have also written a Telnet client which works with the Flyer, although it will only run on a C64 or 128 in C64 mode.  I loaded this up and pointed it at my BBS.  It’s a little rough around the edges but it worked well enough for me to log in and check my mail, pretty cool with a C64!

As the Flyer is JiffyDOS compatible and the standard Commodore serial transfer rate is so woefully slow I decided to order a JiffyDOS upgrade kit for the C128D.  On arrival this consisted of two chips, one to replace the kernel on the main board and one for the 1571 drive.

Once the kit had arrived I headed over to Jim Brain’s site and downloaded the installation instructions for the C128D.  However it soon became apparent these instructions were meant for the C128DCR (cost reduced) model which differs considerably from the C128D internally.

I hunted around but couldn’t find installation instructions for my machine so I decided to trust my instincts and see if I could locate the relevant chips myself.

The drive chip was pretty obvious, being the only socketed chip of the correct size on the drive’s daughter card.  Mine was labelled as a 310654-03.  I gently prized it out with a flathead screwdriver and popped in the replacement.

I then discovered what I presumed was the 128’s Kernel chip, labelled as a 318020-03.  Again I replaced the original chip with the new replacement, reassembled the case and powered on.

The first thing I noticed was that the 1571 was not springing in to life as it usually does on boot.  However the 128 screen came up and there indeed JiffyDOS V6.01 (C) 1989 CMD was displayed.  However there was no flashing cursor.  I decided to completely disconnect the internal 1571 and try again.  This time everything appeared to be working fine.  A quick test using the Flyer to download a program from the cloud server saw an increase in speed from 45 to under 8 seconds, very nice.

I decided to replace the original drive chip and try again with the 1571 reconnected.  Again, no cursor without a Runstop/Restore and even then no joy with either the Flyer or the 1571.  Incidentally the C64 mode was working, but with no JiffyDOS support.

Concerned that in my haste I’d installed the chips in the wrong sockets I headed over to the excellent Lemon64 forum.  There I learnt from the always helpful and knowledgeable members that the 128D requires the same set of chips as the plain C128.  The chips I had were intended for the C128 DCR which is unfortunately also known as the 128D in America, despite being very different from the real European 128D.  As with the C128 the 128D requires replacement chips for both the 128 & 64 Kernel, I believe these are combined on the 128DCR.  Fortunately the original vendor has agreed to send me the correct chips at no extra charge.

Somewhat disheartened for now I removed the JiffyDOS chips and replaced the originals.  As if that wasn’t irritating enough, when I rebooted the machine I was greeted with a black screen in 128 mode.

I consulted R Carlsen’s excellent document on common c128 faults and decided to swap the 6526’s in the U1 and U4 sockets.  However on closer inspection it looks to me as though a previous poor repair to the U4 socket was a possible cause and it looked unlikely I’d be able to remove the chip without causing further damage.  There’s melting to the actual socket, presumably from a soldering iron and some less than expert soldering to the board.  I’m guessing that all that levering out and replacing of chips in the nearby U35 socket has damaged what was already a rather tenuous repair. 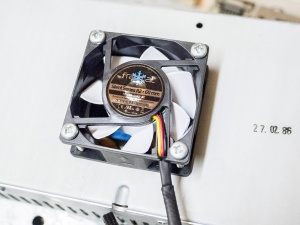 While I had the case apart I took the opportunity to address the other issue with the 128D, the deeply irritating fan noise.  I found a replacement fan that purported to be silent and quickly replaced the original, which is mounted on the underside of the power supply.  On restarting the reassembled machine there was a considerable improvement.  Silent no, considerable quieter and less whiny, definitely.

So for now I have what is essentially a rather bulky Commodore 64.  I may attempt a repair, although I do have a flat C128, which rather ironically doesn’t work in C64 mode.

There was an error retrieving images from Instagram. An attempt will be remade in a few minutes.