A frustrating few days on the Retrochallenge front.  Still no luck in reviving the FDD in the Epson PX-16.  I found some isopropyl alcohol and gave the heads a thoroughly good clean but still no joy.  I ordered the parts I need to build a cable for the RS232 port but they haven’t arrived yet.

I then moved on to try and build a cable that would work with the modem that came installed in the PX-16.  The modem has an RJ45 socket, all the modems that I have owned in the past have come with an RJ11 socket and despite my best attempts I was unable to make a cable for it that would work.  After a considerable amount of time, cable twisting and no dialtone messages I gave up and moved onto something else I’d been meaning to do.

One thing that has struck me since becoming involved in retro computing is that whilst there’s plenty of hardware still out there to enjoy I really miss the more transient elements.  As an example one of my fondest memories of my early computing experiences was using an acoustic coupler and a teletype and connecting for the first time to a remote machine.

Moving forward to the BBS scene and the excitement of dialing machines all over the world, (what my parents made of the phone bill I don’t know) it’s these such experiences that I really miss.  There are of course plenty of BBS’s out there which you can connect to via the Internet but that doesn’t cut it for me from a retro viewpoint, nor are they of any use when it comes to most of my retro hardware.  There are also some dial up systems out there but none that I can find within the UK.

I therefore decided I should try and set up a dial up BBS, if for no other reason than for testing and hopefully connecting some of my retro hardware.  Initially I toyed with the idea of using a Mac Mini G4 that I have in storage, it has a built in modem and the ability to run OS 9.  However I found it quite difficult to find suitable software and therefore turned to my Windows 98 system.  I dug out a Diamond Supra Express PCI modem and installed it and went on the hunt for some BBS software.

I settled pretty quickly on the excellent Synchronet for which the author has also written dial up support. I installed it, connected the modem to a spare phone line that I have at work and after some tinkering had it up and running.  I used my MacMini G4 to connect via another line with Zterm and it all worked very well.  I now need to spend some time configuring things properly and see no reason why I can’t leave this thing running for others to use.

I might be fortunate enough to acquire an acoustic coupler for the Epson PX-8 before the end of the month, I already have a suitable retro phone that will fit the cups, so hopefully I might be able to connect the PX-8, now that would be a challenge!

I’ve been messing around with some terminal stuff today.  I have almost no experience of terminal software so it’s not coming naturally to me.  What I had hoped to achieve was to use the PX-16 with its clearer screen as a dumb terminal for the PX-8.

I don’t yet have a serial cable that fits the PX-16 so I’ve been experimenting with the PX-8 hooked up via RS232 to my Windows 95 box.  By luck one of the PX-8’s I have came with a pre-configured copy of Kermit.  I downloaded Kermit for Windows 95 and set about trying to get them to talk to each other.  After a bit of fiddling I managed to get the PX-8 acting as a sort of dumb terminal for the other box.

What I really want is to do this the other way around but due to my ignorance of the subject I don’t know if that’s even possible, whether you can control a CP/M box via DOS or if you need two CP/M based machines.  In my mind the terminal is just acting as screen and keyboard for the other machine but it doesn’t seem to be working that way.  Still early days and some reading required.

This is just a quick video of me changing directory and listing the directory of the Windows 95 machine on the PX-8. 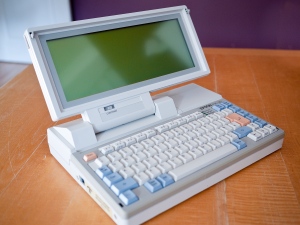 OK, I know it looks a bit like a cash register, especially when it’s sitting on the disk unit but I like it!  I’ve removed all of the internals today and given the cases a good clean inside and out.  I’ve secured the FDD and HDD in the working disk unit and made an attempt to get the FDD working.

The FDD is an Epson SMD-400.  Like the HDD it has a non-standard connection, with power being supplied via the interface cable as opposed to the usual separate cable.  Unlike the HDD it doesn’t work and I’ve been unable to make it read or write to any disks.  I’ve had it apart and fiddled a bit with the spin speed and head alignment but no joy.  Oddly a cable to nowhere has been soldered to the board, I have no idea what it would have been connected to but hope it’s not something painfully obvious like the head.

The unit does spin up and the head moves around but it fails on every disk I’ve tried.  It would of course be nice to slot another drive in there, I’ve got plenty of them but of course they all require a separate power cable.

With no serial cable and no FDD I’m rather limited on what I can do with the machine as I’m unable to get any files on to it.  In desperation I opened up my Windows 95 box and trailed the cable from its floppy into the PX-16 disk unit so the Windows 95 box could power it.  However with it connected to the floppy interface on the PX-16 the Epson won’t start up.

I gave up and turned my attention to the installed modem.  It has an RJ connector that I’ve not seen on a UK modem before.  Usually they’re RJll’s with 4 connections.  This looks more like an RJ45 and it has 8 connections, although it’s a UK specified machine and the modem is made by a UK company.

I started up Term and sent some modem commands to COM 2 and got the usual OK’s back.  I tried to kludge a cable together but was unable to get a dial tone.  So a slightly more frustrating day today although I did have fun playing with XTGold which was on the disk I’d salvaged from the Equity, it seems like quite an impressive file manager.