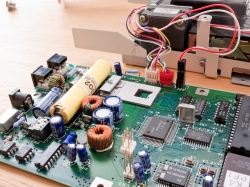 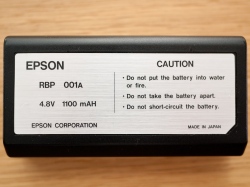 I began this day intending to start and finish my Retrochallenge for Winter 2016.  Of course given the on-going saga of my working and then not so much working Epson PF-10 portable floppy disk drive units, it would have fallen to virgin readers only to be amazed by my expeditious achievements.

Honesty however must prevail and this, my latest attempt to breathe reliable, long term life in to my PF-10 follows an infamous litany of countless failed attempts.

Each attempt has however brought me closer to this final crowning glory (spoiler alert.)

It’s the battery stupid.  Yep, NiCd, 30 years plus old, kind of makes sense really, especially to those of you who have completely ruined Retrochallenge by actually knowing what you’re doing, you with your big brained entryism.

A brief re-cap, the PF-10 has two batteries, both NiCd.  The main battery, removable, sits in a tray at the back.  If necessary it can be substituted for four LR14 dry cells.

The second battery resides internally and is intended as a backup for when the main battery runs low.  An LED on the front of the unit will light when the backup battery has been engaged and will flash when it starts to run low.

Initially, imagining that the main battery was probably an ex-battery (despite no leakage, none of my myriad of Epson NiCds have ever leaked) yet armed with the original power supply, duly plugged in, I naively imagined the unit would work, you know, power from the wall socket plugged in, power.

This I had concluded would be my epitaph, given the amount of times over the years I’ve sat staring at this message, often less than clearly displayed on the PX-8’s low contrast display.

To cut a tediously uninteresting story short, the on-board backup battery is required to hold a decent charge for the unit to work, regardless of how much power is being supplied from the main battery or power supply.

The hunt began to find a suitable replacement NiCd battery, no luck, I tried a NiMh, some luck but of course the on-board charging circuit is not suited.

Thus we find ourselves here today with the end looming of Retrochallenge 2016.  I found a NiCd, it has arrived, I have charged and connected it and yes it works.  Does it fit?  No, certainly not in the space inhabited by the original cells.  Not to worry however, surely it will fit the main battery compartment, no, you’d think it would but it’s off by about 4 mm.

So there you have it, I’m a ‘finding the right size battery’ away from success.  But I’m calling it, and that’s all that matters.

Retrochallenge in a day (or plugging in a battery,) beat that you losers.

P.S. I even used old pictures so I shot some shoddy video to show it working:-

After several months as a dial-up only BBS I recently opened up access to Nostromo via telnet.  Still running reliably from a SanDisk CompactFlash card installed within a Wyse Terminal the discrete unit sits quietly in the corner of my office happily doing its own thing, the only reminder of its existence the occasional screech of the modem responding to a user connecting via dial-up.

Nostromo runs on the simply superb Synchronet BBS software created by Rob Swindell.  Not only is Synchronet a fantastic piece of software but the available documentation makes using it child’s play, even for an eejit like me.  Rob even helpfully provides a free easy-to-use dynamic hostname service which I have taken advantage of.  You can therefore now reach Nostromo via telnet at nostromo.synchro.net.

Enabling telnet access has unsurprisingly led to more visitors both welcome and unwelcome.  It’s been a pleasure to welcome some new users and somewhat less welcome though admittedly interesting to witness various attempts by spammers to relay mail through the mail server.  None of these attempts have been successful and nor will the be, but they are persistent and I may be naive but I am amazed at the speed with which they descended upon the newly Internet facing box.

It is now also possible to FTP into the file area of Nostromo.  You can do so, if your browser supports it by FTP’ing to nostromo.synchro.net.  I have been and will continue to add an eclectic mix of files that I’ve found useful over the last couple of years whilst tinkering with retro gear.  Thus far I have concentrated on stuff related to the Epson PX-8 and whenever a few spare minutes present themselves I shall continue to add files.

A recent Google search for Epson PX-8 software led me to this page, an archive of a 1997 post to the comp.os.cpm usenet group.  Without much hope (assuming the contact details to be out of date) I fired off an e-mail to its referenced author, Bill Esposito, to enquire if he was still in possession of the files from the PX8 dedicated BBS, PX Dock.

Much to my surprise and delight Bill responded quickly and generously sent me an archive of all the files he had.  I shall therefore be sorting through these and adding them to Nostromo in due course.

Anyway, if like me you get a strange buzz out of the thought of being remotely served files from a CompactFlash card you’re more than welcome to FTP in to Nostromo. 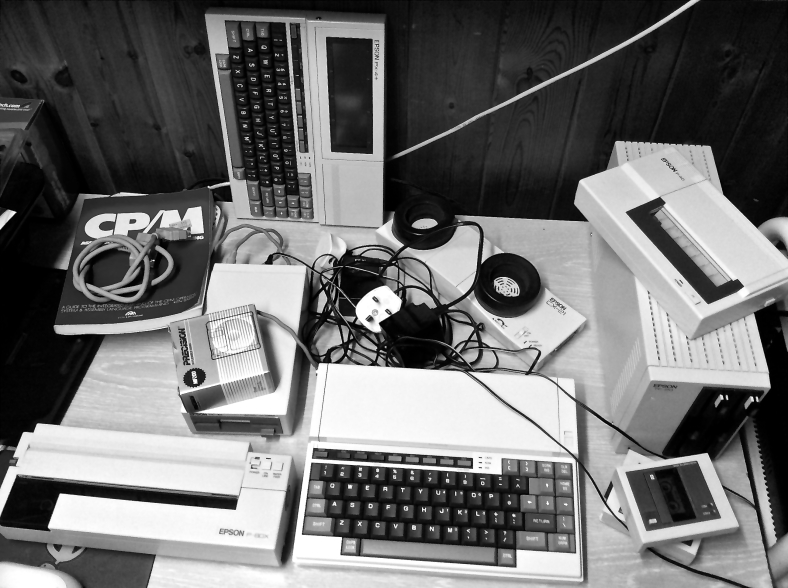 I recently discovered an original brochure for the Epson PX-8 system and accessories.  In it is an image of the PX-8, along with the CX-21 acoustic coupler, the PF-10 FDD, and two printers, the P-80 and P-40.  I was pretty sure I had at least one of all these items kicking around in my collection of retro gear.  It occurred to me it would be fun to try to recreate the aforementioned shot given that almost 30 years had elapsed since it was originally taken.

I delved into my many boxes of gear and pulled out everything I needed.  It was then I realised there was one item that didn’t match, what I’d thought was a P-80 is in actual fact a P-80X which varies slightly in appearance.  Its plastic has also yellowed much more than the other peripherals and looks particularly bad when seen alongside what was my ‘new in the box’ PX-8.  I’m now wondering whether I should perhaps consider a session of Retr0brighting, one of those things I’ve always wanted to do but have never taken the dip.

I’ve always had a thing for portable printers and I’m particularly fond of the P-40 and P-80X. Mine are both in fine working order although I’m unable to hook up the P-40 to my Epson gear as it has a parallel interface as opposed to the P-80X which is serial/RS232.

The P-40 requires thermal paper rolls, the P-80X can apparently print on either thermal or plain paper, I can vouch for the latter.  I’m now wondering whether it would be fun to hook it up to the PX-8 and use it as a kind of Teletype with all output going to the printer.  Anyway I digress.  I arranged all the peripherals as laid out in the original picture and took a quick test shot with which I’m reasonably pleased.

Thus far then not a great deal of challenge on the actual retro front.  Time to think of something fiendishly difficult to fail at.  That beginner’s guide to CP/M assembly in the above shot has caught my eye, I believe it came with my C128D and I’ve never properly looked at it.