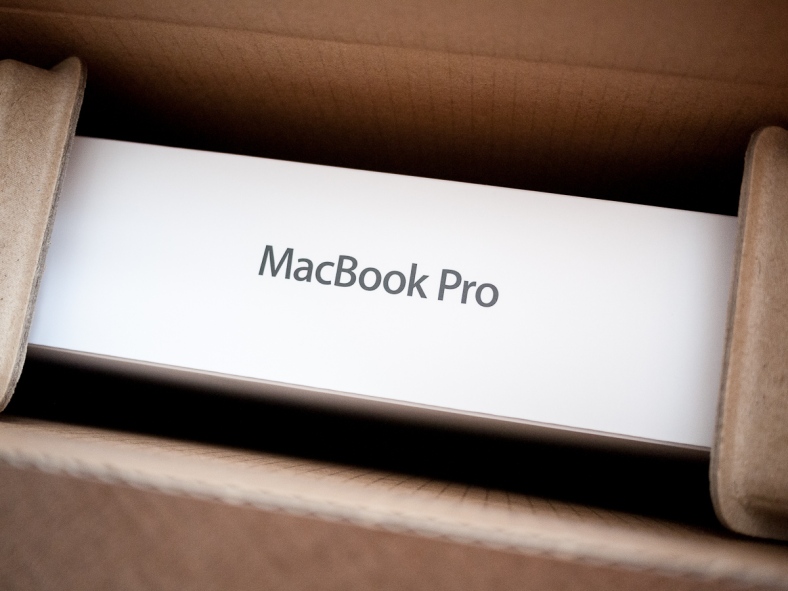 I had for some time been eagerly awaiting Apple’s update to its MacBook line of computers having managed to resist the allure of a new machine for quite a few years.  My 2.4 Ghz Core 2 Duo MacBook is still working well but it’s a looking a little sad what with the broken plastic at the edge of the right hand wrist rest (apparently quite a common failure), the self inflicted white spots on the LCD and the general misalignment of the lid following a couple of drops. 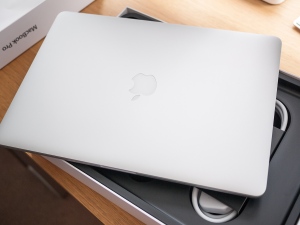 If these issues weren’t reason enough my wife has been using the MacBook for a while (invariably forgetting to charge it) and for her requirements, mainly web browsing and mail it’s still perfectly adequate.  Quite frankly that’s the only green light I needed, so having attempted to justify my extravagance let’s talk about the Retina MacBook Pro.

Not cheap is it, especially here in the UK where the base model comes in at £1799 or roughly $2795 at today’s exchange rate.  Still I suppose that’s what you get when you are, as Stephen Fry put it, ‘an early adopting sillyhead‘.  I ordered my 2.3 GHz model with 8 GBs of RAM as soon as the UK Apple Store came back online following the WWDC Keynote.  Months of pent-up desire for a new machine meant there was no hovering over the confirmation button as with previous purchases, my blood was up, resistance would have been futile.

My shipping notification duly arrived on the 13th of June and I watched with some bemusement over the following days as my MacBook winged its way to old Blighty via China, Korea, Kazakhstan, Poland, Germany and… Castle Donnington.  The packaged arrived, earlier than estimated, on the 18th June.  Having seen the subsequent shortage in supply it seems I was very lucky to receive it so quickly with some who ordered at similar times to myself still waiting. 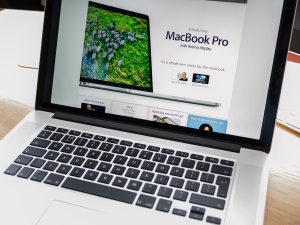 Coming as I was from the aforementioned MacBook the first thing that struck me was just how thin and relatively light this new model is and yet it manages to avoid feeling flimsy or insubstantial, quite a trick to pull off.  Of course the thing that demands your attention next is the screen, impossibly thin and extraordinarily clear, bright and sharp.  Gorgeous blacks on pristine whites and vivid colours all rendered with superb accuracy.

In terms of performance, I’ve had experience of SSDs having upgraded my Mac Pro but there they are restricted by the ageing SATA II interface so it was pleasing to see them operating nearer their full potential in the MacBook.  Blackmagic Disk Speed Test showed write speeds averaging around 390 MB/s with Read speeds at 435 MB/s.  Both results based on 1 GB file sizes. 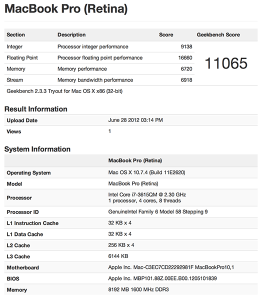 Geekbench returned a score of 11065, pretty impressive for such a light and compact machine.  I decided to try a game which I had previously downloaded for the Mac Pro via the App Store, namely Dirt 2.  It’s not the most up to date game but I have no desire to install Windows on the MacBook as I will not be doing a great deal of gaming on it.  The game ran at 2880 x 1800, the native Retina resolution, although it was stuttering slightly.  The fans did get noticeably louder as the unit heated up and the battery charge took a severe hit.  All I suppose to be expected, dropping the resolution to 1440 x 900 resulted in silky smooth gameplay, video here.

With two Thunderbolt ports and an HDMI port it occurred to me I could try to hook up three external displays.  I plugged my two 24″ Apple Cinema Displays into the Thunderbolt ports and a Samsung TV into the HDMI and everything worked without a hitch.  Initially I only mirrored the displays although I will also create a single desktop across them and test performance, it would be interested to know what ATI’s Eyefinity under Windows would make of such a set up. 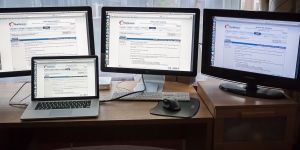 Returning to the Retina display, I have mostly run it at its native resolution where it performs best, although non Retina enabled apps do look quite blurry, particularly when seen alongside those which are Retina compatible.  Clearly Apple is hoping to force the issue and rely on 3rd party developers to release compatible software ASAP, although to be fair even some Apple software is I believe still not Retina optimised.

I’ve also used the ‘1680 x 1050 mode’ which I quite like.  Retina enabled apps still look pin sharp plus you get a little more real estate which can be useful.  In the course of creating this blog entry I’ve used Grab on the MacBook to take some screenshots and when you open these captured images on a non Retina machine it really brings home to you the resolution of simple dialogue boxes.  Click on the image of the Display Properties Pane shown opposite to view it at full resolution. 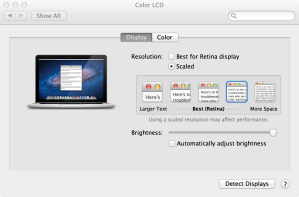 Choosing non standard resolutions does come with a performance hit as the screens are actually rendered at much higher resolutions and then scaled to fit. A couple of other negative points to consider, firstly battery life.  Apple claims typical life of around 7 hours with light use.  In my experience my machine is not achieving this, I would suggest it’s somewhere between 5 – 6 hours, although to be fair that is only an estimate.  Fortunately the battery seems to charge quite quickly.

The other major issue for me is the sharp edges to the palm rests which results in quite painful indentations in the sides of your hands after only 20 or so minutes use.  I really wish Apple would address this issue, yes the clean lines look lovely but surely it’s not beyond the wit of the designers to soften the edge and maintain the clean aesthetic. 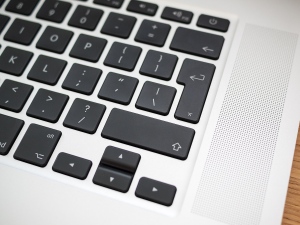 So overall I’m very pleased with the new Retina MacBook Pro, it’s light, thin and gorgeous to look at with plenty of power and just a few minor niggles.  I’m fully expecting this thing to truly come alive with the release of Mountain Lion which I’m eagerly anticipating.

9 thoughts on “A Week With The Retina MacBook Pro”