This past weekend I travelled up to the Vintage Computer Fair (VCF) at Bletchley Park.  It was quite a treat for an old retro nerd like me.  All the usual suspects were there, from the BBC Micro’s to Commodore Vic 20’s and 64’s, the superb Amiga and of course from Sinclair, ZX 80’s, 81’s and Spectrums of various flavours, even a C5 was on view (I always think of the late, great Kenny Everett when I see those.)

There was a wonderfully relaxed atmosphere and it was a pleasure to wander around and look at and interact with the various exhibits.  A number of things caught my eye, including seeing Elite running on a BBC Micro (originally a truly seminal moment in computer games history,) an extraordinary version of the modern game Guitar Hero running on a Commodore 64, with attached guitar and of course the Amiga Tent.

Oh Amiga, how I love thee. Sorry about that, I have fond memories of all of my old home computers, the Vic 20, my first, playing Blitz on Christmas morning 1983, a version of which you can play online here.  Then of course the Commodore 64, its cassette deck that I had to stand on or lay heavy books on to get it to load successfully.  The behemoth that was the 1541 floppy drive (Load “*”,8,1) and of course the chunky modem that opened up the wonderful world of Compunet.

However a special place in my retro nerd heart is reserved for the Amiga, more specifically the Amiga 1200.  My favourite Commodore computer although the market didn’t seem to agree, it sold in reasonable numbers however Commodore sadly folded not long after its launch following what I believe were a whole host of poor management decisions.  Addicted to the brand that was Commodore I also bought an Amiga CD32 (yes it was me) which I still have in pristine condition (didn’t use it much.) 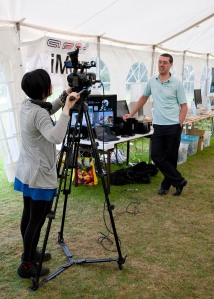 The Amiga has I believe achieved cult status amongst those who know a real computer when they see one, its main rival of the day, the Atari ST, beloved of Muso’s due to its built in Midi ports just wasn’t cool.  This cult status was I believe evidenced by the fact that there was an “Amiga Tent’ at the VCF, a whole marquee devoted to the cult that is Amiga, no other system achieved this distinction (admittedly it was the 25th Anniversary as well but hey.)

I was also pleased to see that there are still people working hard to breath new life into the Amiga and its operating system.  There was the Amiga One X1000 project and the iMica on display, both of which look very interesting.

I managed to keep my wallet in my pocket at the event (apart from a ridiculously expensive burger and bottle of water.)  There was a pretty good condition Vic 20 that I mmm’d and aaah’ed about and I shall keep my eye on the above Amiga projects, a purchase there is probably likely.  However on return, the retro fire well and truly lit, I ordered the excellent Amiga Forever and C64 Forever disks which I can highly recommend.

These projects install an easy to use interface through which you can quickly be in retro heaven, watching old demo’s and playing old games, many of which are included and many more which are available for download.  Remembering fondly Summer Games on the C64 I downloaded it and grabbed a screenshot.  Most events involved wiggling the joystick from side to side as fast as possible in order to run faster.  My friend and I had a secret weapon, a mercury joystick.  Thus it was possible to achieve extremely fast times by frantically shaking this joystick in mid air, switching at a much faster rate than a conventional stick.

Also included in the package are some DVD’s with lots of various footage including presentations and talks by various luminaries from the Amiga development days.  The Dave Haynie interview is excellent as is his film documenting the last days of Commodore ‘The Deathbed Vigil.’

Feeling the need to promote my newly stoked retro fires I also headed over to Lemon Retro Store and ordered a couple of T-Shirts.

I’m now wondering if I want to engage further in the retro community and if so what I’ll have to sacrifice to do so, after all there are only so many hours in the day.