To many it would seem, certainly in my experience, Kate Bush is Wuthering Heights.  Articulating to those who envisage her this way (a doe eyed, tousled brunette, flouncing around slightly awkwardly, screeching hysterically) why a life long fan such as myself has such a deep emotional link with Kate and her music can prove to be quite a challenge.

In those early days of her career, presentation aside, her precocious talent was never in doubt.  Few people at such a tender age could pen a song with the emotional depth and musical complexity of Wuthering Heights.  However I have a confession to make, I rarely listen to Kate’s albums released prior to 1982’s The Dreaming, and even that album much less so than her magnum opus, Hounds Of Love or the beautiful Aerial.

Whereas for many Kate Bush is Wuthering Heights, for me Kate Bush is The Ninth Wave.  Not only hers but arguably one of the greatest artistic achievements of any recording artist in the twentieth century.  The seminal Hounds of Love is laden with an extraordinary clutch of what would become hit records but its real magic lay in the aforementioned seven track concept piece which filled what was then the second side of the album.

A heart-rending tale of a woman shipwrecked at sea, cast adrift and floating, lost in icy waters The Ninth Wave paints in the mind a vivid picture of isolation, desperation, loss, reckoning, redemption, hope, love and ultimately saviour.  It does so with an audacious and breathtaking mix of music, song, poetry, spoken word and sampled sound.

I first listened to The Ninth Wave as a 16-year-old boy and was immediately drawn in.  It hooked me in and wouldn’t let go.  I have listened to it more times than I care to remember.  It is, along with much of Kate’s other music embedded in my soul, it is part of me, part of who I am.

As much as I tried to avoid reading reviews of Before The Dawn prior to experiencing it myself I still became aware that The Ninth Wave would play a prominent role in the evening’s events.  Already excited this sent me in to a tailspin of nervous anticipation and trepidation.  What if I had misinterpreted it, what if Kate’s visualisation differed completely from mine, what if I was disappointed?  The stakes couldn’t be higher.

On arrival at the venue the

queue moved quickly.  We were at the door and ID was being requested.  I was prepared, I had my driving license in my wallet but upon removal I showered it along with several other cards all over the floor.  Coordination has never previously been an issue for me but clearly nerves were taking hold.  My wonderful wife hoovered everything up and took over, we were in.

We were also very early.  Not wishing to drink a great deal and having had admired the beautiful interior of the theatre we were left with an agonising wait.  We clock watched for an hour and then made our way to our seat.  Located centrally in the Circle, block 9 we had a superb view of the stage.

The theatre filled, the atmosphere was electric and Kate was welcomed on stage to a standing ovation (fortunately masking the remarkable amount of late-comers.)

Beginning like a traditional concert Kate opens with six songs ‘Lily’,  ‘Hounds of Love’, ‘Joanni’, ‘Top of the City’, ‘Running up that Hill’ and ‘King of the Mountain’.

Her voice reassuringly beautiful and emotive, her band quite superb, the sound quality from a technical perspective is exceptional.  The driving drumbeat of Running Up That Hill thunders through the theatre.  As ‘King of the Mountain’ comes to a close ‘The wind is whistling, the wind is whistling’ builds tumultuously until an explosion of what looks like leaves explodes and blows across the auditorium (later inspection would reveal paper sheets printed with a passage from Tennyson’s The Coming of Arthur.)

Wave after wave, each mightier than the last,
Till last, a ninth one, gathering half the deep
And full of voices, slowly rose and plunged
Roaring, and all the wave was in a flame

The stage darkens, Mino Cinelu, the band’s percussionist appears front of stage, wildly swinging a bullroarer.  Picked out in freeze frame by strobe lighting it’s a powerful and unsettling mix of aural and visual stimulation.  The Ninth Wave begins.  A film plays, a man trying in vain to report to the coastguard a garbled distress call he’d received from an apparently sinking ship.  Another film, this time of Kate, adorned with life jacket and adrift, helpless in the dark sea.

This later film the reality of her situation, the action on stage seemingly her thoughts and dreams as she drifts in and out of consciousness.

The opening notes of And Dream Of Sheep send tingles down my spine, I began to cry, not because of the emotional content of the song but simply because after waiting for thirty years my mind’s eye was being realised in front of me, it was almost too much.

The song details the battle with consciousness as the icy waters take their toll.  ‘I wish I had my radio, I’d tune in to some friendly voices, talking ’bout strange thing, I can’t be left to my imagination, let me be weak, let me sleep and dream of sheep.’

Next comes the beautifully haunting ‘Under Ice’.  Now seemingly unconscious Kate dreams of skating freely across the ice of a frozen river, ‘I’m speeding, past trees’.  In her dream she sees something ‘moving, under ice’ and as she drifts momentarily back into consciousness, a sinister realisation and scream ‘it’s me eeeee ooohhhh!’

A team of rescuers try desperately to cut through the ice, first with axes and then with success a chainsaw.  Kate’s limp and pale body is pulled from the water, they try in vain to wake her.  Now on the brink of death the hugely powerful ‘Waking the Witch’ begins, she sinks back in to the water.  A reckoning with God, ‘Bless me father for I have sinned,’ a trial to determine her fate.

Found not guilty she regains consciousness ‘Wake the witch!’ She hears a rescue helicopter “Get out of the waves! Get out of the water!”  At this point the thunderous sound of a helicopter fills the theatre, a moving gantry with searchlight and powerful jets of smoke circles looking in vain for Kate.  It’s an assault on the senses, unrelenting, a hugely powerful moment of theatrical drama.

The scene changes and we’re introduced to Kate’s family as pictured in her imagination.  A domestic scene at home, her son and his father, arguing playfully, there’s some humour here as the twisted set rocks uncomfortably.  ‘Watching you without me’ begins, Kate appears miraculously in the scene as she imagines herself at home as a ghost, indeed watching her family without her.  The phone rings, the husband receives news of his wife’s situation, he looks forlornly at his son. It is again, a moment of great emotional power.

Now remembering that she has something to live for we’re treated to ‘The Jig of Life’ a fight back against the odds,  ‘C’mon and let me live, girl!’

Next the beautiful ‘Hello Earth.’   Beginning with samples taken from first space shuttle mission the song seems to reference the view of Earth from space, ‘With just one hand held up high I can blot you out, out of sight’ and the forming of the storm that caused the shipwreck ‘watching storms start to form over America, can’t do anything just watch them swing with the wind out to sea.’ Huge sprawling sheets move in waves across the stage as other survivors of the wreck appear clinging to an illuminated buoy and Kate tries in vain to climb aboard.

In very dramatic fashion Kate is lifted above the heads of the eery and unsettling fish people and carried off stage and in to the stalls via what looks like a ship’s gangway.  I interpreted this as her being rescued (although it seemed like a funeral procession) as next comes the final piece of the act ‘The Morning Fog’ a joyous celebration where she sings of ‘being born again, into the sweet morning fog’ and returning to her family and telling them how much she loves them.

The Ninth Wave comes to an end.  Emotionally drained, I cried softly through most of the performance, I fall back in to my seat to try to fully comprehend what I’ve just experienced.  It was everything I’d imagined and at no point over the last 30 years did I dare to dream I might one day see Kate Bush perform it live in front of me.

After 20 minutes or so the lights dim and Kate and the band return for A Sky Of Honey, another concept piece taken from 2005’s Aerial.  Less theatrically ambitious and much more serene this part of the show charts 24 hours of an English summer’s day from dawn through to sunrise the next morning.  It is wonderfully evoked with beautiful birdsong, a painter painting the sunset, a sky of honey, and a young boy represented by an animated mannequin passes through a huge door in to the day ‘Mummy, Daddy, the day is full of birds’.

As we travel through the setting of the sun through to the moonrise and eventually the sun again rising the beautiful suite of music from A Sky Of Honey is delivered with perfection.  A short interlude allows Bush’s son Bertie, playing the character of the painter, a chance to perform a song on his own.  Then comes Aerial, building relentlessly towards the reappearance of the sun.  An extraordinary crescendo that again assaults the senses on every level, ‘Look at the light, climbing up he aerial!’ 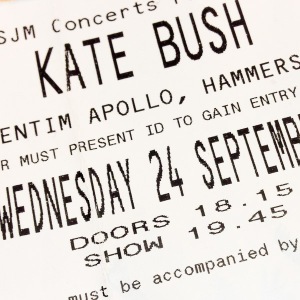 The concert ends and the audience rise to their feet with rapturous applause and cheering.  Kate seems genuinely moved and humbled by the response.  She and the band leave the stage and the noise of the crowd intensifies until Kate reappears on her own to sit at the piano and deliver a soaring, pitch perfect rendition of ‘Among Angels’ from her most recent album, 50 Words For Snow.  In itself it’s a moment of devastating beauty, few could rival such a performance.

Then finally comes Cloudbusting, a chance for the previously restrained and respectful audience to let their hair down and at Kate’s invitation join in the singing.

A triumph then on every level.  Like baring your soul and basking it in the light of everything that you’ve ever held dear.

Emotionally exhausting, hugely exhilarating, at times dark and deeply disturbing, then brilliant and life affirming.  It was well worth waiting for Kate Bush.