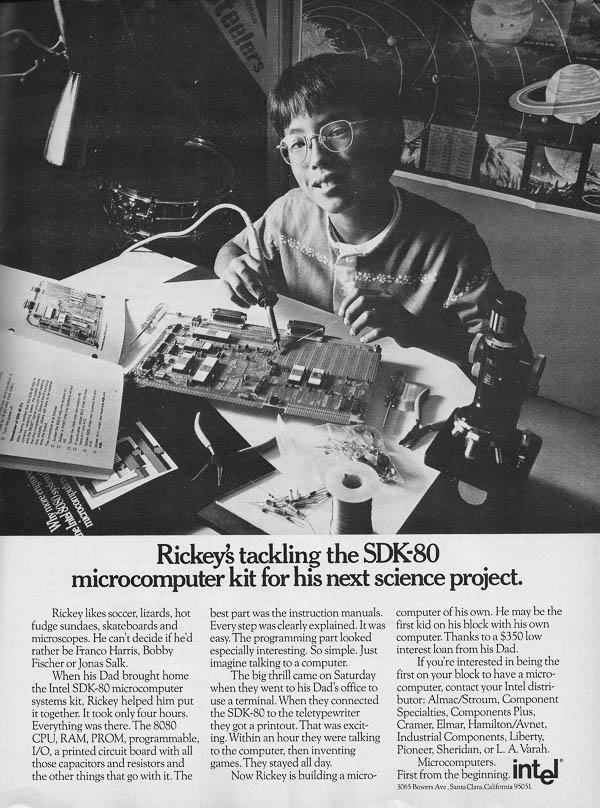 When his Dad brought home the Intel SDK-80 microcomputer systems kit, Rickey helped him put it together.  It took only four hours.  Everything was there.  The 8080 CPU, RAM, PROM, programmable, I/O, a printed circuit board with all those capacitors and resistors and the other things that go with it.  The best part was the instruction manuals.  Every step was clearly explained.  It was easy.  The programming part looked especially interesting.  So simple.  Just imagine talking to the computer.

The big thrill came on Saturday when they went to his Dad’s office to use a terminal.  When they connected the SDK-80 to the teletypewriter they got a printout.  That was exciting.  Within an hour they were talking to the computer, then inventing games.  They stayed all day.

Now Rickey is building a microcomputer of his own.  He may be the first kid on his block with his own computer.  Thanks to a $350 low interest loan from his Dad.

If you’re interested in being the first on your block to have a microcomputer, contact your Intel distributor: Almac/Stroum, Component Specialities, Components Plus, Cramer, Elmar, Hamilton/Avnet, Industrial Components, Liberty, Pioneer, Sheridan, or L.A. Varah.

Intel Microcomputers.  First from the beginning.