Some of you will no doubt be familiar with last year’s story surrounding Jordan Mechner’s discovery and recovery of the Prince of Persia source code, you can read about it on Mechner’s blog here.

I suspect many of us have on occasion stumbled upon old floppy disks stored away in the back of cupboards or in our lofts.  Over the years I have found several stashes of both the 3.5″ and 5.25″ variety.  It certainly seems to be pot luck as to whether they are still viable and whether any recoverable data remains, although I have noticed that certain brands seem more resilient, 3M, Dysan, Verbatim for example.

In the process of searching for components for my bridge machine I stumbled across another such stash in my loft.  I found my original Amiga game disks, titles such as Defender of the Crown, Monkey Island, Frontier and so on, some Amiga joysticks, a Philips CM 8833 monitor and most interestingly for me a box of 5.25″ disks. 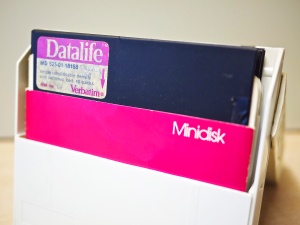 On closer inspection of the box I found two disks that I had used back in 1985 for my computer studies class at school.  What chance I wondered if any data could be recovered?

The computers that we used at school at the time were BBC Model B’s.  I don’t currently have any BBC machines in my collection although I now feel a strong urge to acquire one along with the Microvitec Cub monitors that were ubiquitous at the time.  I therefore had a look around to see if there was any software that might allow me to read the disks in a PC.

I quickly found the superb OmniDisk by Jason Watton and nervously inserted the first disk.  After working my way through all the options it became clear there was nothing to be found on the disk.  Of course there may not have been anything on the disk in the first place so undeterred I turned to the second disk, barely legible on the label, mine and Urbancamo’s form group – 5C4.

Immediately it became obvious there was some data there.  I ran through the various options in OmniDisk (did I mention how superb it is) and eventually managed to extract an image from the disk and from this I was able to pull out the individual files.

Loading these into a text editor revealed that they were BBC BASIC programs, namely my game ‘Yahtzee!’ and Urbancamo’s ‘Airman’.  Not exactly Prince of Persia but nevertheless pretty exciting on a personal level to recover such data from a disk that is the best part of 30 years old and has spent most of its life suffering the extreme temperatures of life in the loft.

The files are stored in tokenised binary format which results in a lot of garbage when viewing them in a standard text editor.  I had a hunt around and found the BAS2TXT DOS program here which converts the files into readable text. 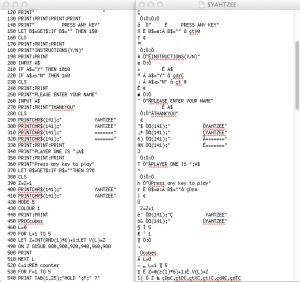 It worked very well although I still had to jump in and make a few manual corrections, but then that was ever the case when it came to my laughable attempts at coding. That’s why Urbancamo did the coding and I did the pretty things.

I’ve also recovered Urbancamo’s ‘Airman’ program and sent it to him, I think he may be incorporating it into his Retrochallenge which would be cool.  Perhaps if he can finally finish that, he could move on to his PhD, snork.

Anyway, the next challenge was to see if I could run the code.  Nostromo BBS user Stuart Johns pointed me in the direction of BeebEm, and I found a Mac version courtesy of Jon Welch.

I fired it up on my Mac Mini, copied my newly cleaned up code and pasted it straight into the emulator window, typed RUN and slap my thighs it worked!

There on the screen my hopelessly inept attempts at coding in full view for the first time in 28 years.  Yahtzee!

There was even sound.

Subsequent attempts to access the original floppy disk have failed, it seems this really was last chance saloon stuff.  Of course in the grand scheme of things it’s largely irrelevant, but on a personal level recovering those files has been a real ride and has brought back some fond memories.

If I can find a Beeb at a sensible price I think it may well be my next purchase.

6 thoughts on “@Retrochallenge – Recovering The Past”