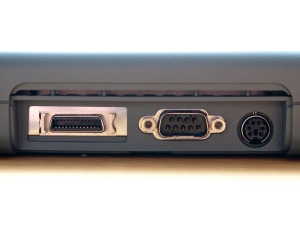 I’ve decided to take advantage of the few days of holiday I have left to get well and truly stuck into this year’s Winter Warmup as once back at work progress will no doubt slow considerably.  My first task has been to find a way to transfer software onto the PenMaster, there are a number of ports on the device but nothing I can easily use.  The FDD port is of a design I’ve not encountered before.  Initially I thought an old Fujitsu FDD I had might fit, however although the connector looks the same it is on a much smaller scale.  It then occurred to me I could use the parallel port Zip Drive that I’d recently connected to my Atari Portfolio.  I’d still need drivers of course but if I could find them I thought I would at least be able to add them to my BBS (Nostromo) and then dial in and download them onto the Samsung.

I searched for a while before finding some drivers for Windows 3.1 on Epson’s site here.   I have to say I really like Epson as a company and the way it continues to support its old products.  I downloaded them onto the Windows XP box that hosts Nostromo and added them to the file section.  When I got home I dialled in with the PenMaster using Terminal and the built in modem and managed to connect.  However the internal modem refused to connect at anything greater than 1200 baud which may be its limit but seems a bit poor.  I made several attempts to download the Zip software but it kept failing. 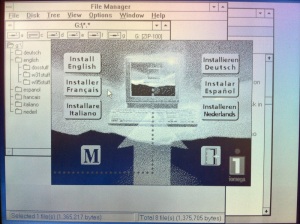 So out came the trusty US Robotics Sportster which once connected to the solitary COM port on the PenMaster successfully connected at 19200 Baud and downloaded the Zip software in relatively quick fashion.  I had to modify the config.sys slightly, changing the ‘Lastdrive=’ entry to free up a drive letter for the Zip drive.  After digging through my Zip Disks I was able to find the original Zip Tools disk which allowed me to complete a full install of the Zip drivers and software.

Combined with my USB Zip drive I now have a pretty quick and painless way of downloading software on to one of my Mac’s, putting it onto Zip Disk and then loading it via the parallel port Zip onto the Samsung, first major hurdle hurdled.

I’ve also been trying to get acquainted with the pen input of the PenMaster, learning the gestures for space, return, delete etc.  It’s not bad, I can imagine with some practice you could probably get proficient at entering stuff fairly quickly.  Just to show how lacking in proficiency I currently am I thought I’d challenge myself to log on again to Nostromo and send a Tweet using just the stylus.  I recorded the process and include the video below for those who are very patient.  I have however also attached a keyboard and even managed to dig out serial mouse which still works which should offer more rapid progress.  I rather like the fact that the Tweet was not perfect, speaks volumes for handwriting recognition.

Tweeted with the Samsung PenMaster