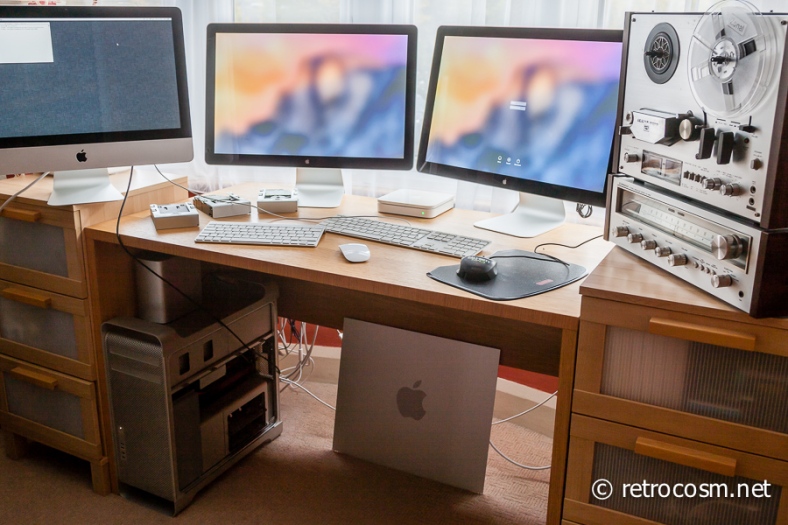 Having let the dust settle a little from the initial release of OS X Yosemite, I decided to take the plunge and see if I could coax it on to my Mac Pro 1,1.  As many of you will know the original 2006 Intel powered Mac Pro does not sport the required 64bit EFI to allow either Mavericks or Yosemite to install via the usual method.

You can read all about the method I used to install Mavericks despite this limitation in this previous post:- Mac Pro 1,1 and Mavericks.  Using almost the same method as outlined in that post I have a working installation of Yosemite. 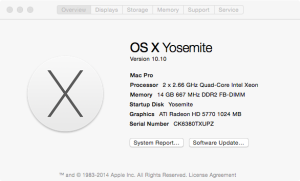 There were only two things that I did differently.  Firstly, instead of installing on to a newly formatted SSD I decided to try the upgrade route and install on to my existing drive thus preserving all of my installed applications.  Secondly I used  Pike’s new boot.efi, (thank you to commenter Ralph Sampson for pointing me in the right direction) as I believe Tiamo’s existing version will not work.  More details and latest version here.

The install itself went smoothly and early tests indicate that everything appears to be working with the exception of Facetime which was also broken for me under Mavericks.  Not a huge issue, I may get around to calling customer support as prompted by the pop up window if I feel the need to see if it can be resolved.  I have experienced a few graphical glitches whilst using Lightroom 4.  I’m not sure if this is specific to Lightroom or a wider issue.  I’ll report back in due course.

Installed the 10.10.1 update with no apparent problems.  I’ve resolved the graphic glitches for now by selecting ‘Reduce transparency’ in the Accessibility settings.  I’ve also been experiencing random wakes from sleep (wake for ethernet access is not enabled) along with the SSD that I have installed on a card in a PCI slot being randomly ejected.

One other problem that I have which I believe is more likely to be related to some new RAM that I’ve installed is the fans spinning up much higher than usual on wake from sleep.  I decided to try some cheaper RAM without the Apple approved heatsinks to bring the total system memory up to 26 GB.