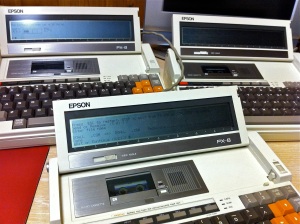 Lately I’ve been experimenting with new batteries for my Epson PX-8’s (I have three PX-8’s now, it’s a worry I know.)  Of the three’s original batteries, one still holds a reasonable charge, the other two however require the AC adapters to be permanently connected.  This is not a huge issue but with high capacity NiMh batteries pretty cheap these days I decided to look into replacing the original NiCad’s.

The original NiCad’s are 4.8 V 1100 mAh packs, ideally I wanted replacements that were of equal or greater capacity.  Having hunted around and looked at a myriad of options it became clear the most limiting factor was the size of the battery compartment on the PX-8.  Initially I was tempted by a 4 pack of 1.2 V AA cells at 2700 mAh, however there was no way of squeezing these into the compartment even with a homemade pack.  I also looked at new NiCad’s but really wanted to go with NiMh.

In the end I tried two options, a ready made four pack of Sanyo Eneloop AAA cells at 800 mAh and some loose Duracell AAA’s at 1200 mAh secured in a simple 4 cell battery holder.  Both options are working well and lasting for what seems like forever.

I’m no expert on battery charging so don’t fully understand what the consequences will be of using the supplied Epson adapter and the PX-8’s charging circuit on the modern NiMh’s.  From what I do understand the PX-8 will charge for 8 hours and then drop into trickle charge with its standard NiCad.  If you disconnect the AC adapter and plug it in again the charge cycle will start again possibly leading to overcharging.  The AC adapter is an unregulated 6 V 600 mAh model. (Epson HOOAAU-A)

As far as I can tell, the NiMh’s are taking somewhere in the region of 2 hours to fully charge which seems to me to be what’s considered fast charging. 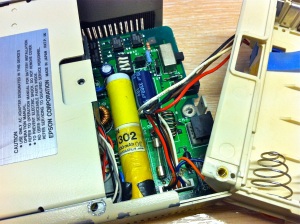 With July rapidly approaching my thoughts are turning this year’s Retrochallenge.  I have a number of possible avenues to explore.  Continuing with the battery theme I really would like to try and revive my PF-10’s.  I’m pretty sure the problem lies with dead sub batteries inside the units.  The main batteries are easy to swap out, however the sub batteries are soldered to the logic boards and it’s been a long time since I’ve been near a soldering iron.

I also have a Commodore 128D which I’d like to get fully acquainted with including using it with CP/M, in fact it would be nice to try and get it talking to a PX-8.  On that theme I’ve been experimenting with the PX-8 RS232 ports and quite fancy writing some sort of two player game with communication via this route.  Decisions to be made.